Lately I’ve decided that I will be doing blog posts for The Elven Padawan primarily on Saturdays. In the past I’ve done them rather sporadically and with no real pattern, pretty much just whenever the mood struck. But that’s not fair to all you guys, since you never know when a new post might pop up. Now it’ll be much easier for you to plan for them and you’ll be expecting them when they do happen.

It’s just the posts for The Elven Padawan Blog (like the cosplay breakdowns and craft tutorials, my own theories and rants [like that thing about Ahsoka I did last week]) that are changing a bit.

So for this week, here’s the first post in this new arrangement: a brief rundown on all the cosplay projects I’ve done so far. A few I’ve talked about it even detailed extensively on here (like my Thrawn one), but I’ve had a couple requests for pictures of my Rey cosplay, so I decided to put them all on here.

This was the first full-on “cosplay” attempt I had ever done, and I’m still doing some work on it. Rey’s full Desert Scavenger ensemble is one that can be worked on slowly for a very long time, especially if you’re trying to get all the pieces authentic and screen-accurate. So far I’ve got the actual clothing pieces out the outfit (shirt, pants, body wraps, arm bindings, boots, belt, and wristband), along with the turban-style headwrap she’s wearing while scavenging at the very beginning of TFA, her staff, and a weathered olive/brown canvas backpack that I’m using until I can find something better. (Hey, it was a couple dollars at Good-Will, already wonderfully weathered, and looks great with the rest of the outfit!!)

I’ve been wanting to get pictures of this one for a while, so when the weather was nice out I threw the outfit on and roped my little sister into helping me snap some. I didn’t have time to do the full Rey hairstyle, and since I hadn’t planned for this photoshoot, I didn’t do the makeup either. But I got some really great shots of the full outfit and the staff, and decided to share them with all of you here. 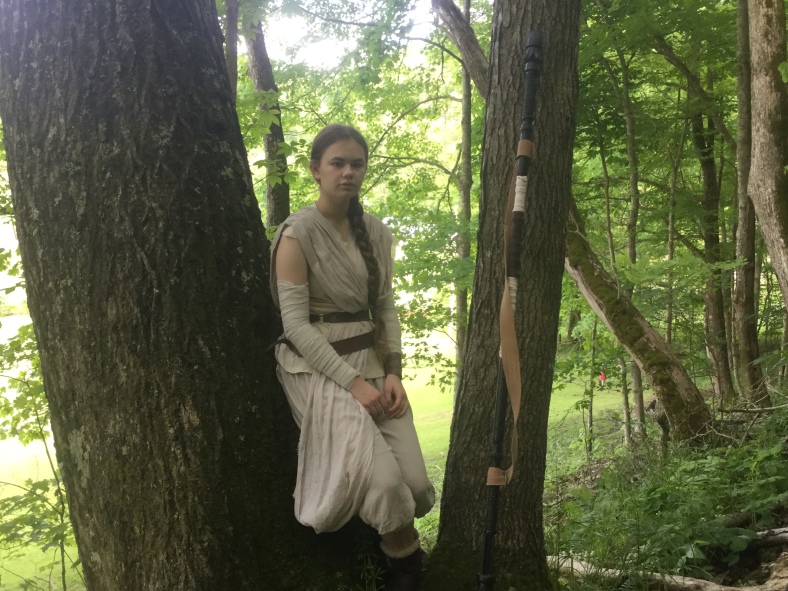 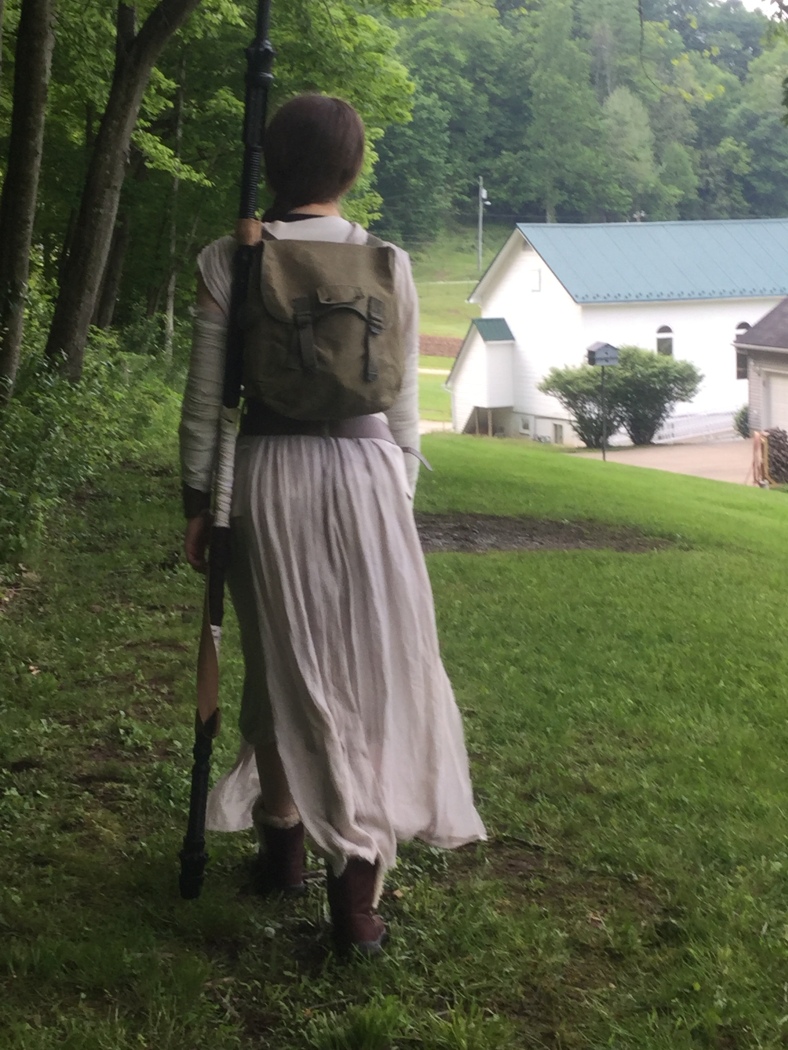 This one is just so much fun!! Sadly, I have yet to actually wear it “in public”…we’re working on that one…😉

Besides trying to hunt down a good replica for the small pouch Rey wears at her hip, and doing some alterations on the boots so they’re more screen-accurate, I also eventually want to remake the wristband and belt from real leather. I’ve already hunted down a really nice 3D-printed replica of Rey’s blaster, which will be at the top of the list come my next birthday.

And just a word on that staff: I totally love it!! 😀 I made it all myself from bits of hardware and an online tutorial. I went ahead and used a metal pole for the base, instead of a lighter PVC pipe, and I’m glad I did. It adds enough weight to the staff to make it really seem authentic, and somehow that really makes getting into character so much easier and more fun! I seriously do think I could knock someone out with that thing (not that I’ve ever actually tried….😉😆) There is a slight drawback to the extra weight however, and that’s that you have to be careful not to accidentally wack a wall, door frame, or another person with it. (Once again about the “knocking out” part.)

Most of you have already heard all about this one, but for those who haven’t here’s a brief overview.

I wanted to go full-out for May the 4th this year. I was debating between several different outfits, one being the Rey one above, but what kept standing out in the front of my mind was a genderswapped version of Director Krennic, from Rogue One. I would switch the tunic and pants out for a knee-length dress and leggings, keeping intact the sweeping white cape, rank badge, boots, and other little details that make Imperial officers stand out. But I also really, really wanted to do alot of makeup work for my outfit this year, particularly attempting to paint all my exposed skin a color that would be considered outside of normal. That’s when the idea hit me: genderswapped Grand Admiral Thrawn. Season 3 of Star Wars: Rebels had just ended, and I had been totally in awe of his tactical genius, always-in-control way of doing everything, weirdly calm and unsettlingly relaxing voice – let’s just face it, the guy’s awesome!! Not to mention he’s one of the only nonhumans in all of the Empire!! It was totally the right choice to bring him back to Star Wars canon.

And so was born my epic genderswapped Thrawn cosplay!! 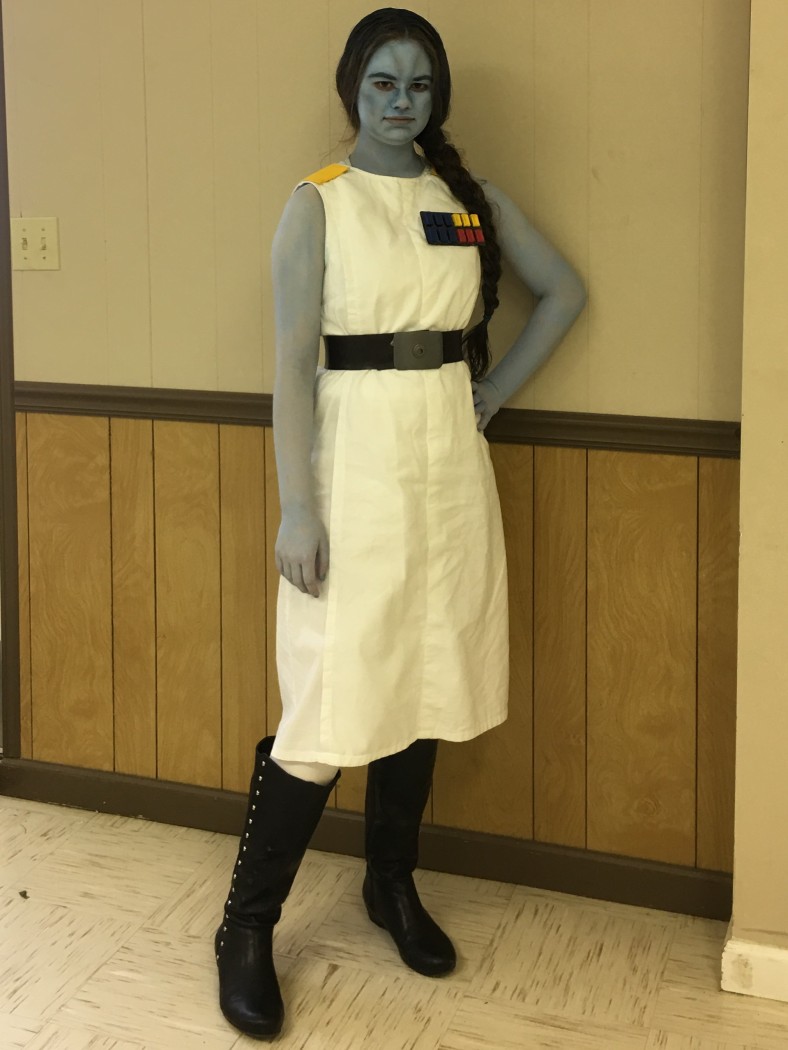 (I’m planning to add some of those awesome red contacts as soon as I get the funds and an equally awesome place to show them off.)

But wait!! Here’s a special surprise that none of you have seen.

I have just obtained special permission to share this bit of intel with you: Thrawn was not alone that day! There was another Imperial by his- um, her side… 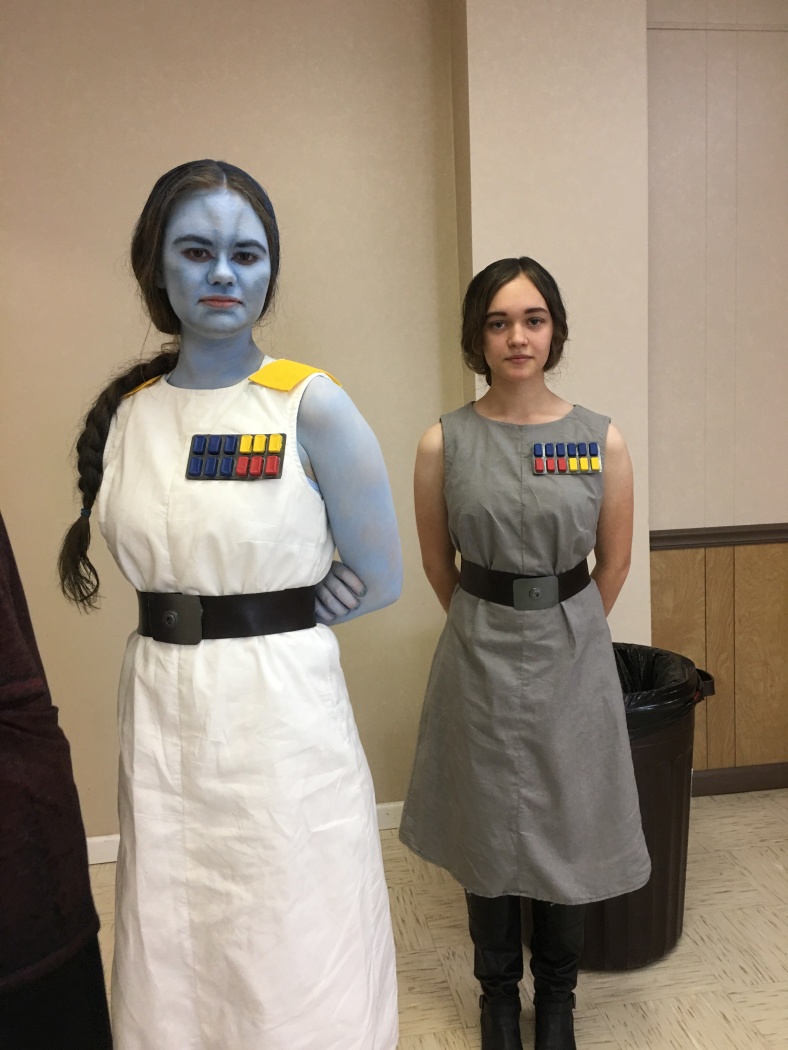 Thats right, my sister cosplayed as Governer Ahrinda Pryce!! It was sooo awesome!! Though it will probably never happen again, since she’s not nearly into all the cosplay stuff as I am. She’s more of the collector, with a room full on LEGOs, lightsabers and other props, and the beginnings of our new Funko POP! collection. (Seriously, y’all don’t know how hard it was to convince her to let me share this photo; she gets really funny about actually wearing her costumes out in public or showing them to other people.)

Ok, so this one isn’t actually a full cosplay yet. Actually, it’s more like outfit that I Plan to use as I component for a future cosplay. (Possibly an Old Republic-reminiscent, Elf-based-Jedi mashup type outfit. Or an Elven warrior from The Berinfell Prophecies book series that I love so much!)

This started out as Arwen’s Chase Dress from The Lord of the Rings: The Fellowship of the Ring. But when I went to cut out the pieces from the fabric I had found, I realized there wasn’t going to be enough. Since all the main body pieces, plus the pieces for the high rolled collar and drape-y lowers parts of the sleeves were cut out, I simply improvised and ran with it. I used the fabric from those lower sleeves and collar pieces to make an enourmous hood, trimmed the hem a bit so it was even all the way around, and left the sleeves off entirely. Then I sewed the pieces together, top-stitching zigzags over all the front bodice seams and surging all the raw edges so I wouldn’t have to hem them. I also left the front open entirely, all the way down, then added metal eyelets to the edges so I could secure top closed with leather lacing. The skirt is split, just like Arwen’s in the original design, so it can function wonderfully as either a cloak or overdress, leaving the wearer the full ability to ride a horse or swing a saber. 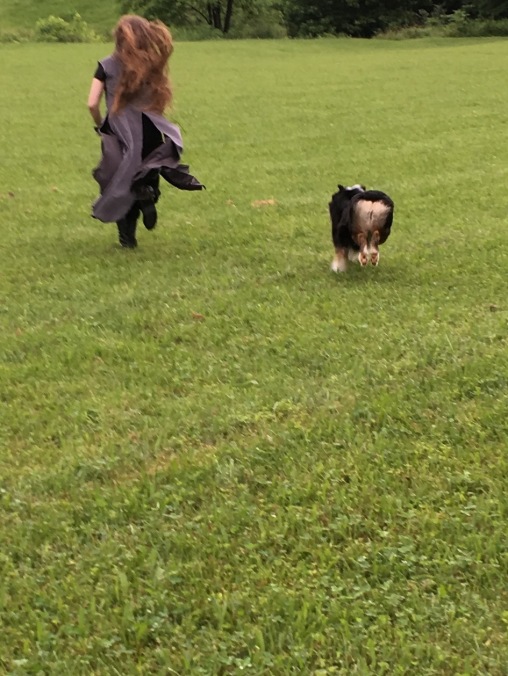 (And yes, that is the dog who was barking in the background of my last podcast episode.)

This one was more of a “closet cosplay” that I threw together in a couple afternoons for a small Fall Festival we were doing with some friends a little while back.

I used a short green dress I already had, along with some brown gaucho-things I had drawn out a pattern for, and a pair of short boots.  I also whipped up some “leather armor” to finish the look: a cuirass and pair of arm bracers. (I made the “armor” out of scrap fabric I had lying around. I saturated each piece in regular spray paint, which stiffened the fabric, made it all about the same color (since the cuirass was made from yellow cotton fabric and the bracers from brown flannel), and actually gave it a rather leathery look.)

I put on my latex elf ears from Aradani Studios (which I absolutely love, btw!) and left my hair down. 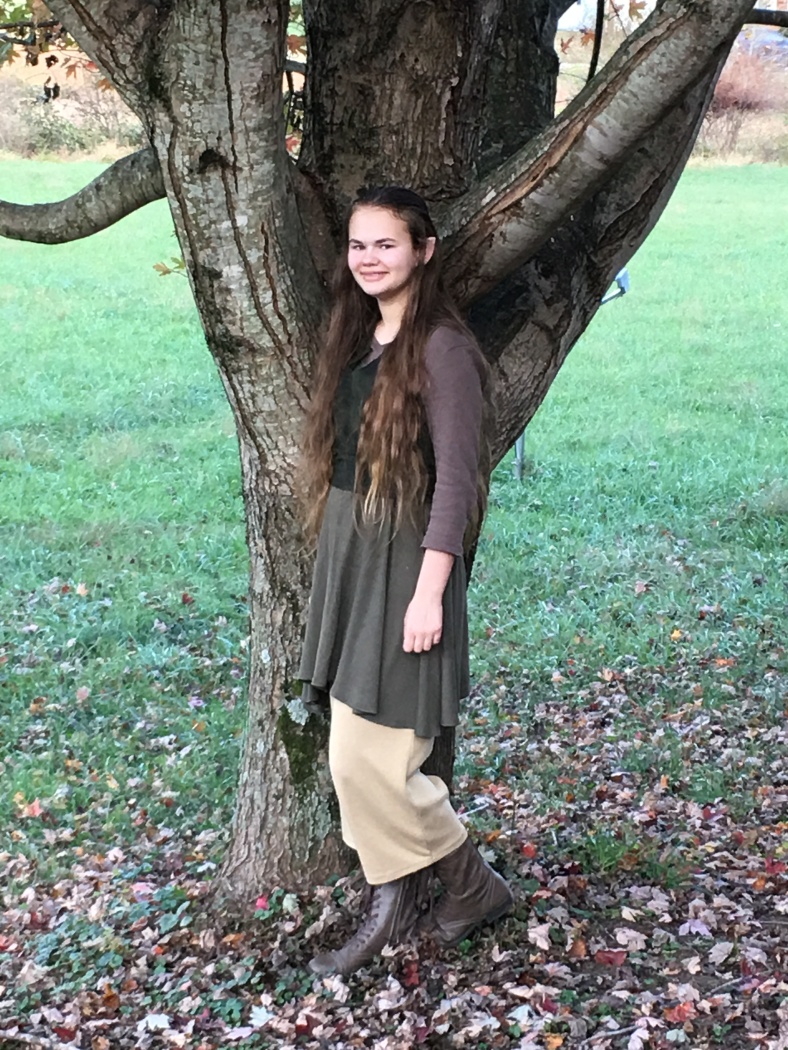 *fangirl sidetrack: would that be the greatest band name ever?! 😆

Ok, so this one’s a bonus. These are the costumes I made for my younger sisters for May the 4th last year. The one closest to my age (who did Pryce this year) wanted to try out Kylo Ren, and the other two were a couple of anonymous Jawas. I also made all their costumes, except for Kylo’s mask and saber, which we ordered from the illustrious and ever-intriguing Amazon. 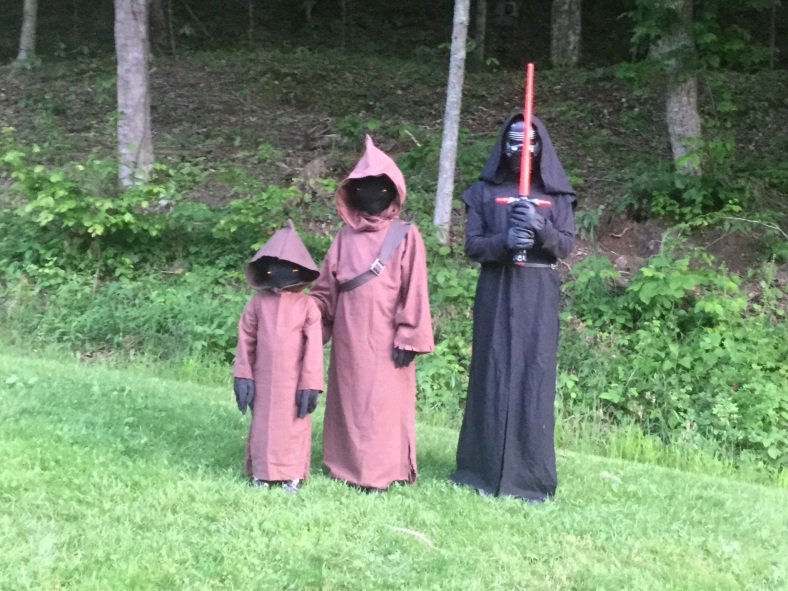 So that’s it for this week’s post from The Elven Padawan blog!! I hope you all enjoyed this, and there’ll be another post next week.

Please let me know what you think it the comments! I’d love to hear about any costumes, or really any other projects, that you’ve done!! 😊

This article was written by Shay S., Creator, Chief Editor, and Podcast Host for The Elven Padawan, and first appeared on ElvenPadawan.com